Cancer can leave you shocked, sad, devastated, and helpless! All at the same time.

There is a need to be aware of this disease because irrespective of gender, caste, creed and province, Cancer can affect anyone!

There are many forms of cancer, but all of them start with out-of-control growth of abnormal cells. More than 100 types of Cancer have been discovered and researched on.

In recent times, Cancer cases and deaths have increased at an alarming rate. Studies reveal that Cancer has become the biggest cause of deaths in India with 1,300 deaths daily and about 5 lakhs deaths every year. Among Indian men, stomach cancer cases grew by 33% since 1990, while prostate cancer shot up by 220%. While among women, breast cancer has had one of the highest increase at 166%. Increased population, unhealthy lifestyles, use of tobacco and tobacco products, unhealthy diet, lack of diagnostic facilities are some of the factors that attribute to a high rate of mortality in Cancer.

On hearing the word CANCER itself, our mind gets occupied with so many negative connotations about it. A lot of people believe it to be synonymous with death, but recent studies and researches in the field of Oncology have proven that a disease like Cancer can be cured and avoided if certain preventive measures are taken before time.

Prevention and early detection are as crucial as the treatment of Cancer. Early detection can help save a life, and it can only happen if you know how many kinds of Cancers are there, what their symptoms and treatments are and how it can be prevented. One needs to have proper knowledge about it and to get that knowledge it is important for one to know the source of such information. We have started this initiative to help those who seek knowledge and it also opens new gate for Cancer patients and survivors to share their stories and inspire others to be open about it. Join us and be a part of world full of hope, positivity and inspiration!

Breast Cancer is a malignant tumor that starts in the cells of breasts. Malignant tumors are cancerous and are made up of cells that grow out of control & spread to other parts of the body.  Usually Breast Cancer begins in the cells of the lobules, which are milk-producing glands or the ducts that act as passage from which milk is drained to the nipple. Less commonly known, Breast Cancer can also begin in the stromal tissues, which include the fatty and fibrous connective tissues of the breast.

Despite being a serious disease, which is on a rise these days, not many women are aware that early detection and regular breast screening can do wonders in preventing its occurrence. Every women above 25 years of age should do regular Breast Self-exam once every month and look for symptoms like: 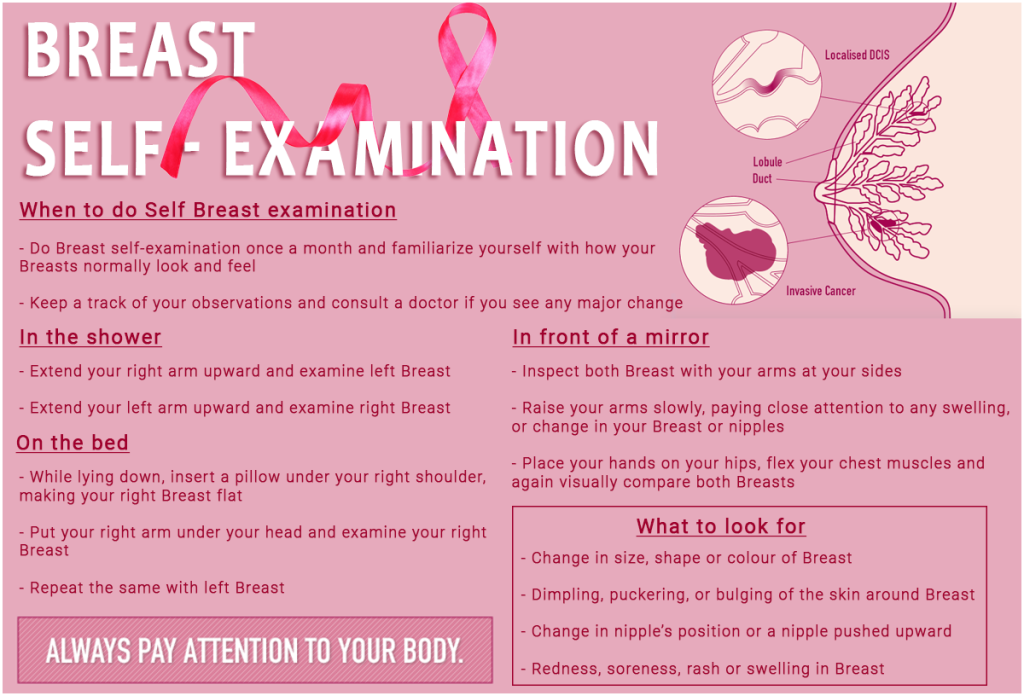 However, healthy habits may help reduce your risk of developing Breast Cancer, such as:

We all know that early detection is the best protection and can increase the chances of survival in 80% of the cases. Many women diagnosed with it turn into its victims due to their ignorance and unawareness. Moreover, there is a social stigma associated with Breast Cancer as people still hesitate to openly talk about it. This creates a vicious cycle of fear and misinformation among masses. It’s time we get rid of our inhibitions, raise awareness about avoidable cancer risks and importance of early detection.