Most of us know that the major function of our kidneys is to remove toxins and excess fluid from the body and they play a key role in maintaining a stable balance of body chemicals. They also produce hormones that affect the functioning of other organs. For instance, a hormone produced by the kidneys regulates the production of red blood cells. But, what happens when your kidneys stop functioning properly and what causes hindrance in their functioning?

When your kidneys don’t work properly, you may develop kidney failure. When they stop functioning, harmful wastes and fluids can build up in your body, your blood pressure may rise, and your body may not be able to make enough red blood cells.

Chronic Kidney Failure – A gradual loss of kidney function that results from a long-term disease. It is the most common type of kidney failure, which cannot be reversed, but can be managed through medicines, regular checkups and dialysis.

Acute Kidney Failure – This happens as a result of the sudden loss of kidney function due to an injury or harmful substances. It can usually be reversed if treated on time in a majority of cases.

End-stage Renal Disease – It is a condition where kidneys do not work at all or only very little. Patients with this condition need some form of renal replacement therapy, e.g. Kidney replacement or regular dialysis.

What causes kidney to stop working?

There are a number of factors that affect the functioning of a kidney. Diabetes is the most common cause of End-stage renal disease (ERSD) followed by high blood pressure. Other problems that can cause kidney failure are:

In this type of kidney failure, which is not permanent, your kidneys may go back to normal with treatment and medications.

Do you ever feel you’re one of the special ones being targeted by mosquitoes while they seem to avoid others in a group? Have you ever wondered the reasons behind this loving behavior of mosquitoes towards you?

The following factors have been identified that contribute to making a person more attractive to these mini monsters: 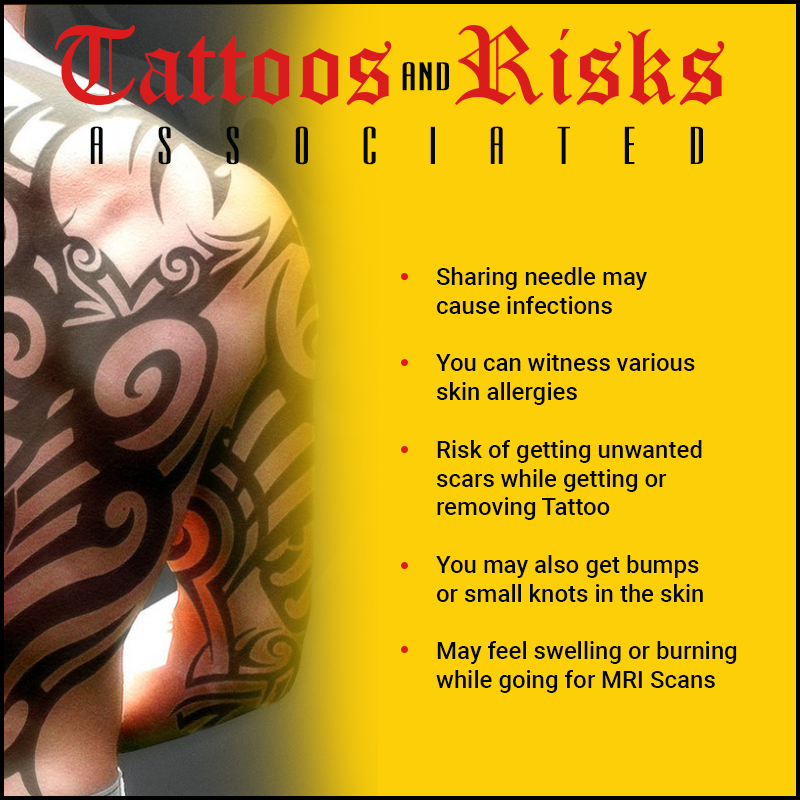 India, the world’s most populous country accounts for a quarter of the world’s annual incidence of TB. Every year approximately two million people develop TB in India and 300,000 die of TB i.e. 2 deaths every 3 minutes. Over 15 million patients have been treated and 3 million additional lives have been saved by the Revised National TB Control Programme (RNTCP) over the last decade.

However, despite a comprehensive national TB control program that provides Guidelines for implementation of TB diagnosis and treatment, there is still a long way to go and the emergence of drug-resistant TB has become a major public health concern.

There are many challenges for TB control in India. Prompt, accurate diagnosis and effective treatment of TB are not only essential for good patient care but also the cornerstone of any initiative for tuberculosis control.

The need for quality and standards for TB care including diagnosis and treatment is made necessary where a largely unregulated and unmonitored private sector accounts for almost half of the TB care delivered in India. Thus, it was felt essential to develop and disseminate the standards of TB care that is particularly relevant in Indian context, acceptable to the medical fraternity in both the public and private sector in India.

To ensure early diagnosis, providers must be aware of risk factors for TB and perform prompt clinical evaluation and appropriate diagnostic testing.

WHO- approved micro-biologic tests for tuberculosis: 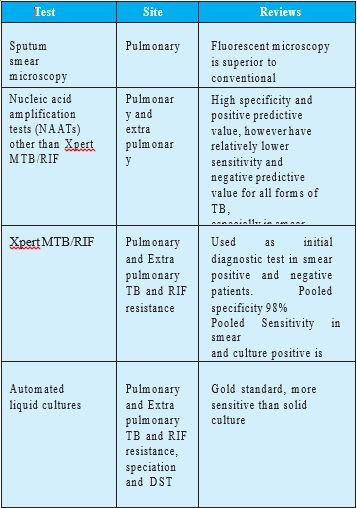 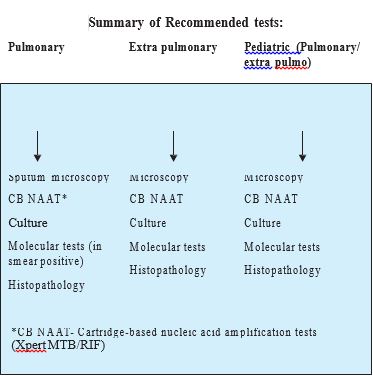 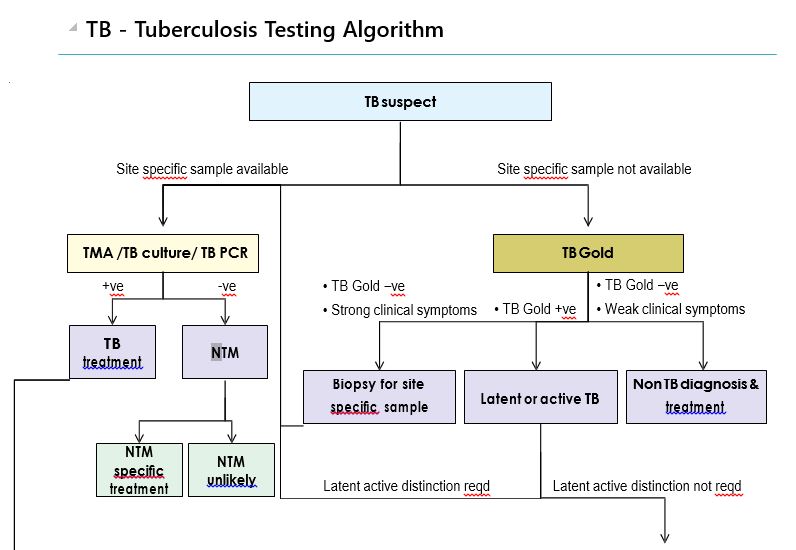 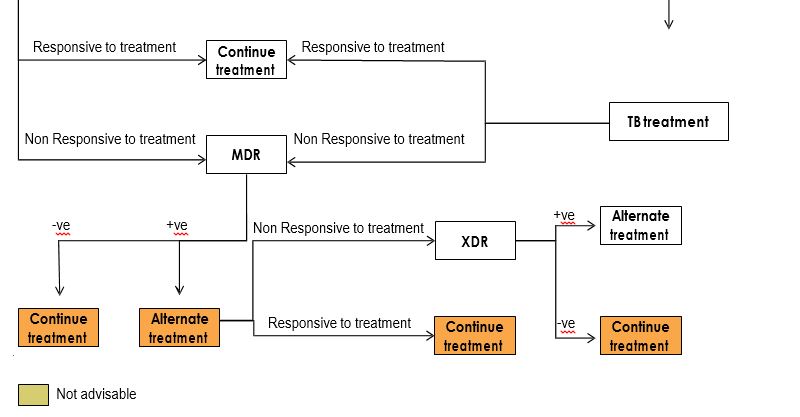 Introduction of a new magic drug Sofosbuvir for HCV infection at an affordable price has led to renewed interest in treatment of this disease. Treatment regimen to be used is dependent on the proper diagnosis of various aspects of HCV infection. Investigations for diagnosis of HCV infection include serological assays for antibodies to hepatitis C (anti- HCV) and molecular assays for detection of viral RNA. In addition, investigations for stage of hepatic fibrosis, determining genotype of the virus and IL28b polymorphism are also required. 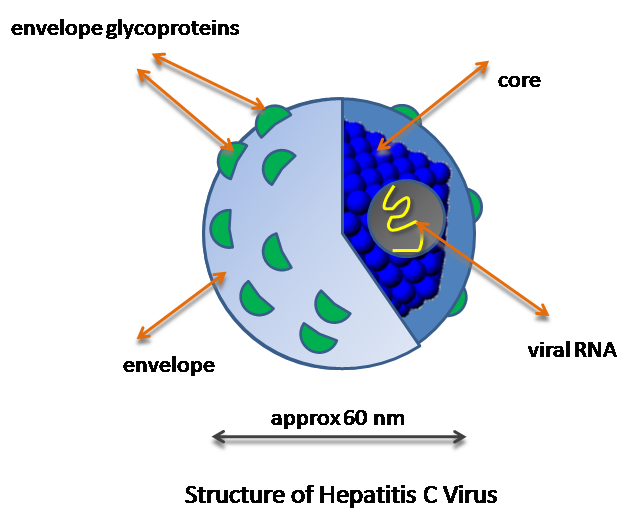 Presence of anti-HCV antibodies indicates prior exposure to HCV infection. However, the assay may be negative early in acute HCV infection, in immunosuppressed individuals. Anti-HCV antibodies can be detected by rapid immunoassays, enzyme-linked immunosorbent assays (ELISA), or chemiluminescent immunoassays. Quality of some of the test kits for anti-HCV may be a reason for concern.

Rapid immunoassay tests use a unique combination of modified HCV antigens conserved across all genotypes. However, some studies have demonstrated that rapid tests cannot be solely relied upon in screening patients from high- risk population in India. ELISA tests indicate presence of antibodies against HCV core, NS3 and NS5 regions. A study in North India has demonstrated the value of blood banks screening using two ELISA kits concurrently to improve detection of contaminated blood.

Detection of HCV core-antigen, a protein with highly conserved sequence, by enzyme-immunoassays may be a simpler alternative to RNA detection. Its major role may be in identification of blood donors who are in the pre- seroconversion window. It has been shown to be more cost- effective than nucleic acid testing for early diagnosis of HCV infection. Its cost has been estimated to be around 4-10 times lesser than the in-house reverse transcription-polymerase (RT-PCR) assays. It has the potential as an alternative to detect active HCV infection where HCV RNA testing may not be feasible.

HCV RNA testing is recommended for:

HCV RNA testing should be done using a sensitive method (lower limit of detection of<50 IU/ml) and the results should be expressed in a standardized format as IU/mL.

Read our next blog on HCV Genotype Testing.